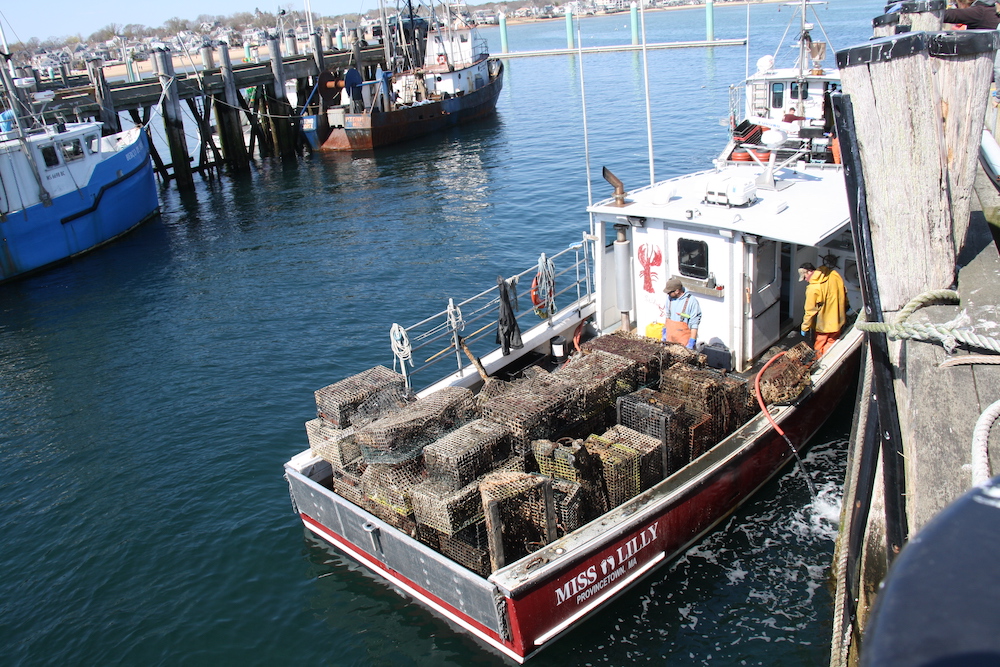 It’s hard to pinpoint the origin of the phrase, “One man’s trash is another man’s treasure,” but on the Outer Cape, Laura Ludwig of the Center for Coastal Studies (CCS) has been embodying the sentiment by helping to turn lost and abandoned sea waste into art while simultaneously cleaning up the marine environment. In eight seasons her Fishing Gear Recovery Project has removed more than 58 tons of material from the bottom of Cape Cod Bay. Ludwig and her team find uses for almost everything that is dredged up, either returning it to its rightful owners or recycling it, often turning it over to artists. “I hardly throw anything out anymore,” she says.

On a sunny, unseasonably warm Saturday afternoon in late April, the lobster boat Miss Lilly pulls up to the end of MacMillan Pier with a rich bounty. After seven hours trolling a roughly quarter-mile area in Provincetown Harbor, her stern is piled high with 47 lobster traps, five cubic yards of rope, small pieces of net, some steel cable and a rusty, but intact, anchor. Ludwig is waiting onshore to retrieve the finds with Annie Lewandowski, a composer, performer and senior lecturer in music at Cornell University, who will be using some of the rope in a major exhibition, and Kay Matschullat of Media Art XPloration (MAX) in New York.

For the next half hour Ludwig carefully and repeatedly lowers the hook on the pier’s crane to Owen Nichols, standing onboard. Nichols, a scientist at CCS, accompanies almost every recovery excursion in order to document the finds, and examine the impact the gear has on the environment. He attaches the hook to the items and Ludwig carefully pulls them up. The traps and rope are slimy with algae and sponge. Many traps hold clusters of mussels. It is not unusual for the crew to also find crabs, lobsters, fish, sea urchins and other creatures living inside. They release them all at sea. On this day a crab that had been hiding wanders out from a trap onto the pier and is tossed back into the water.

Miss Lilly’s owner and captain, Mike Rego, spends the winter trolling for lobster traps instead of the animals themselves because lobster fishing is not allowed in Cape Cod Bay from January 1 through May 15, in order to protect the critically endangered North Atlantic right whales from becoming entangled in lobstering lines. When she moved to Provincetown from Maine in 2012, Ludwig saw the annual closure as “a clear opportunity” to continue work she developed in Maine – the recovery and recycling of lost, abandoned or discarded fishing gear. If no one removed them, the traps, rope, net, buoys and cable – much of it plastic – would just stay in the ocean, posing a permanent danger to whales and other sea life. 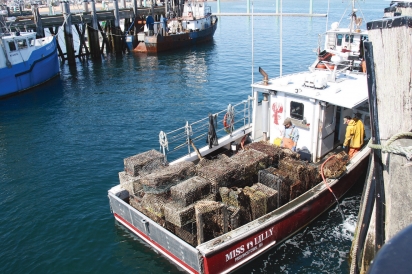 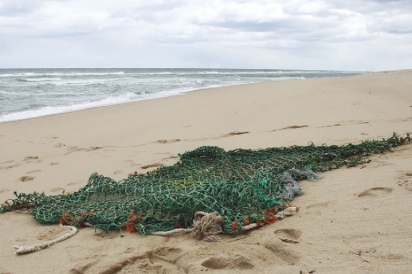 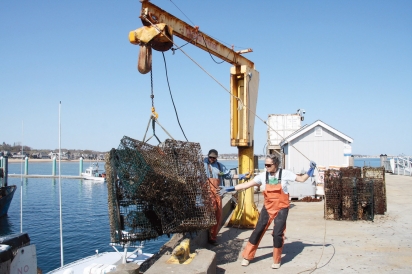 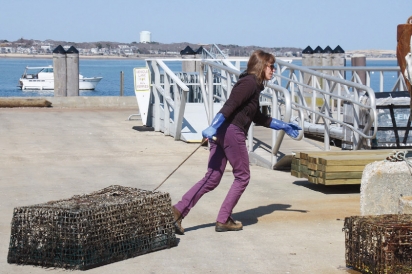 Ludwig works closely with commercial fishermen and the Department of Marine Fisheries. This year the project had enough funding for 18 recovery trips. Before the trips, a CCS mapping team conducts sophisticated sonar surveys of areas where fishermen suspect they will find lost gear. All of the recovery work is done by commercial lobster boats out of Provincetown, Sandwich and Green Harbor equipped with grappling hooks and, usually, the sonar imagery. (Sometimes they “freestyle,” or go out to an area they haven’t surveyed but where they suspect they will find items.)

Rego, a fourth-generation Provincetown fisherman, has been catching lobsters in the harbor for 23 years. He started working with Ludwig when she launched the reclamation project. Though she pays the fishermen for their time, it amounts to roughly half their in-season day rate. “They “contribute a huge portion of what it would cost to rent a boat for the day,” Ludwig says of her commercial partners.

“I like making a paycheck. Who doesn’t?” Rego says. “But I really got into it. I never realized how much ghost gear is out there.” This season Rego changed his grapple setup for the first time in eight years, and pulled more out of the bay than during any previous season. A week and a half after their 47-trap haul, he and his crew returned to the same spot and got 100 more traps, most of them recreational, in two days. Last year that same location was far less fruitful. To the fisherman, looking at the sonar and towing a grapple hook 300 feet behind the boat “is kind of like a game. It’s satisfying getting the stuff off the bottom,” he says.

Lewandowski has been captivated by whale songs since she was in high school. She began studying them in 2017, interested particularly in how whale song evolves. She is currently working on “Siren-Listening to Another Species on Earth,” an immersive program that will incorporate whale song recordings she made in Hawaii in 2019 with bio-acoustician Katy Payne. Payne and her ex-husband, Roger, recorded the ground-breaking album, “Songs of the Humpback Whale,” in 1970. MAX commissioned Lewandowski and code artist Kyle McDonald to produce “Siren,” which will premiere at MAX’s “Neuroverse” in Manhattan, in November, before traveling to Cornell.

Lewandowski explains that “Siren” is a way to honor the legacy of the Paynes’ work and their role in whale conservation on the fiftieth anniversary of their album. She will incorporate roughly a ton of rope and netting that she traveled to Provincetown to collect from Ludwig. Symbolically, the use of marine debris will call attention to the whales’ risk of entanglement. “The netting and ropes we collect will resemble the shapes of how AI maps the language of whales,” she explains. “We’re using twenty-first century technology to connect to our mammalian relatives. I thought it would be [important] to include the debris. We couldn’t just showcase the beauty.” 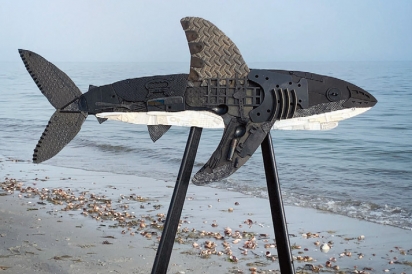 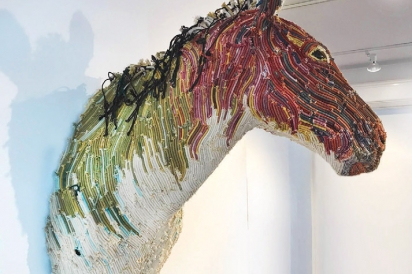 Gin Stone, who lives in Harwich, has been working as an artist for more than 20 years. About 10 years ago she had what she refers to as “some painter’s block.” She had been picking up marine debris from the beach and thought she might use some for inspiration. Instead, she just started to use it. “I found that long-line fishing gear took dye really well,” she recounts. Stone started dyeing the line and wrapping it around three-dimensional items. Eventually she found her niche – non-hunting taxidermy, wrapping the reclaimed line around taxidermy forms, using seashells for her animals’ eyes, driftwood for antlers. Stone’s horses, bears, deer and other creatures are beautiful and fantastical, each with their own expression and mood. “Every piece is different,” she says. “It’s an awesome way to use something that was going to end up in the ocean as debris.”

Where she used to rely directly on fishermen for her materials, she now turns more to Ludwig, whom she met in 2018 through Nichols. “Laura is so good about finding a home for what’s basically garbage,” she says. “I’ve loved getting to meet all the fishermen and the scientists, melding art, science and environmentalism.” Recently Stone has had to adapt her medium because the synthetic longline material she started off working with can no longer be used for fishing. Taking advantage of gear from CCS, she has been experimenting with new netting materials.

Sarah Thornington, a photographer and artist, lives on the water in Harwich and walks her dog on the beach every day. A few years ago, she casually began to pick up plastic she found on these walks. Before long, she says she realized she had collected “so much crap that I need[ed] to do a project.” Thus began Thornington’s “A Year of Plastic,” chronicled on Instagram. In that year there were only seven days that she did not collect plastic. She combed every beach on Cape Cod and some on travels throughout the year. In the end, 50% of the plastic was from her beach. Thornington turned her found pieces into objects of beauty. She configured colorful plastic shellfish bands into bright, beautiful butterflies and other objects. She crafted a piping plover out of assorted marine debris. Her whales and sharks, made largely of plastic, served both as art and education at shows at the Cultural Center of Cape Cod in Yarmouth and the Atlantic White Shark Conservancy in Chatham.

Thornington and Ludwig met in 2019 at a summit co-sponsored by CCS and CARE for Cape Cod and the Islands. “[She] said, ‘I have so much rope for you.’ Laura is the only person I will take stuff from. I don’t need any more plastic,” Thornington laughs. “I was weaving baskets out of ghost rope.” She continues her own collecting and creating, storing her finds in her photography studio.

On Earth Day, April 22, CCS also coordinated beach cleanups. Due to the ongoing pandemic, these had to be virtual for the second year in a row, with people working in small groups on beaches spread across the Cape rather than one large gathering. Volunteers collected lobster trap ID tags, nets and pieces of nets, colorful rope, and plastic and glass bottles. (Note: our own Larry Egan became part of this story when, exiting Truro’s Head of the Meadow Beach after taking some photos, he spied something colorful poking up from the sand. Over an hour later, he dragged himself off the beach with a very heavy net that will find new life in an art installation TBD.) There was a second beach cleanup for volunteers two days later, also limited in size due to the pandemic.

“I love to think of all the cool stuff this gear has done – in addition to aiding fishermen and feeding people,” says artist Stone. 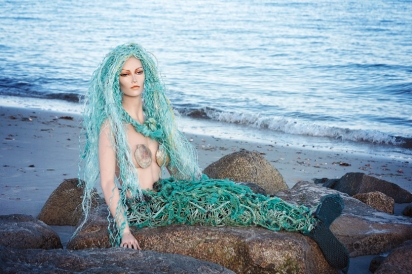 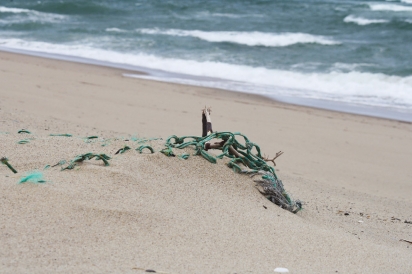 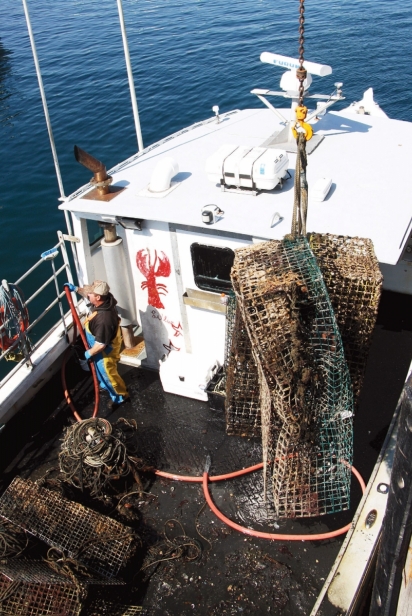 Miss Lilly Captain Mike Rego works the hose while another pile of lobster traps is hoisted.

see all
Article from Edible Cape Cod at https://ediblecapecod.ediblecommunities.com/about-us/fishing-ghosts